Coronavirus: The fake Bill Gates post and other claims to ignore 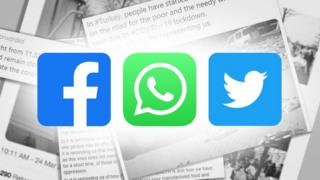 Coronavirus: The fake Bill Gates post and other claims to ignore

Whether it's a post on your uncle's account or an image your friend forwarded, fake coronavirus stories seem to be everywhere.

To help, BBC teams are verifying and fact-checking the latest and most widely-seen examples of fake and misleading information.

A long message attributed to Bill Gates, the Microsoft billionaire, encouraging people to reflect positively on their lives during the coronavirus outbreak has been shared thousands of times in multiple countries. It made it on to verified accounts, national newspaper websites and the Instagram account of Naomi Campbell, the supermodel. 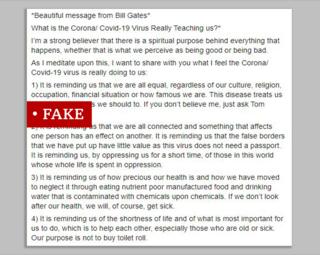 But we know that Bill Gates had nothing to do with it.

Someone has, however, approached the BBC claiming to be the original poster. Mohammed Ali from London said he published the message on Facebook on 16 March, but hadn't attributed it to Mr Gates. 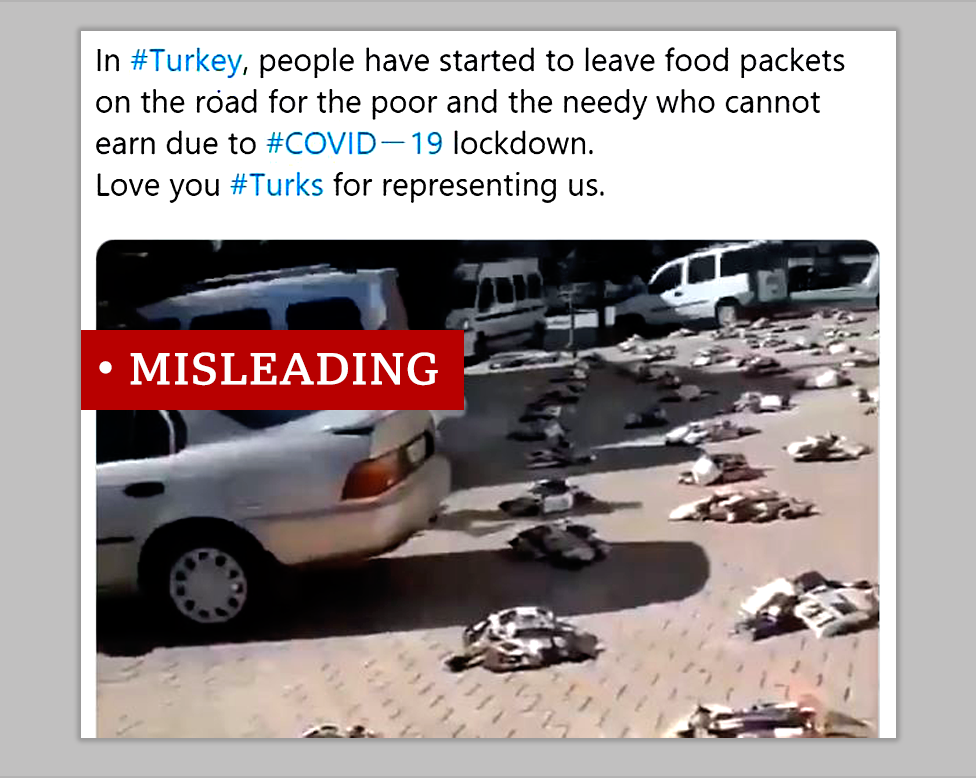 Some posts say it was shot in Turkey, while others claim it shows a city in Iraq or India. Most praise the video for showing how their country is helping the poor.

The film is genuine but it's two months old so the posts are misleading. The donations were not for people affected by coronavirus, but for the victims of an earthquake.

To get to the bottom of this, BBC verification specialists successfully identified the location of the video after noticing a shop or advertising sign with the words for "very cheap" in Turkish.

From there, the clip was traced back to a longer, live-stream of an event in the city of Konya in Turkey, uploaded to Facebook on 25 January.

The same sign, van and trees in the background match in both. 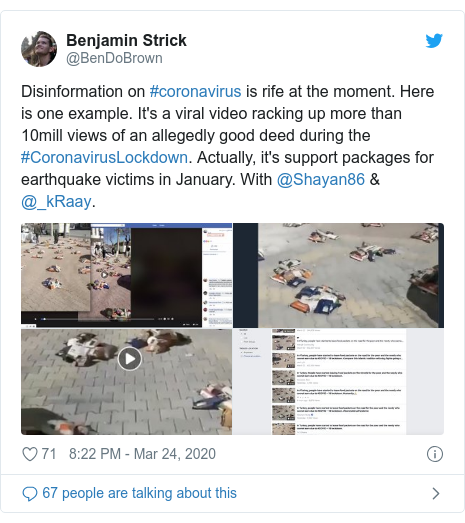 The charity behind the event confirmed the video was not related to Covid-19.

Coronavirus and chloroquine: Has its use been approved in US? Coronavirus and ibuprofen: Separating fact from fiction Health myths you should ignore How bad information goes viral

Photos of fake messages that look like they're from the UK government, and threatening fines for leaving home too often, have been circulating on social media.

They claim that the government is tracking people and issuing fines for those who leave their homes.

One highlighted by Greater Manchester Police as a fake, said: "You have been fined £3550.73 for leaving your property without reason." 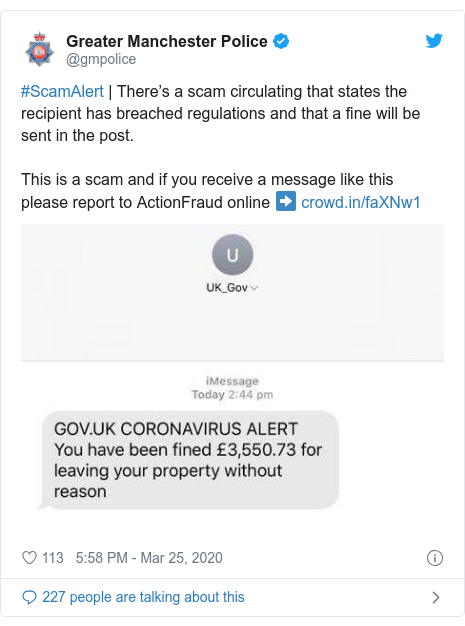 The government did send out a text explaining the new rules this week.

But the government says that any "others claiming to be from the UK government… are false".

It's not clear if these messages were sent out by scammers or were just doctored screenshots.

Helicopters are not spraying disinfectant

This is a rumour that just won't go away and has crossed international borders. A message in various forms has been doing the rounds on WhatsApp and elsewhere: it tells people to stay indoors because from 11:30pm helicopters are going to spray disinfectant into the air to eradicate coronavirus.

But there's no evidence this has happened or is happening. 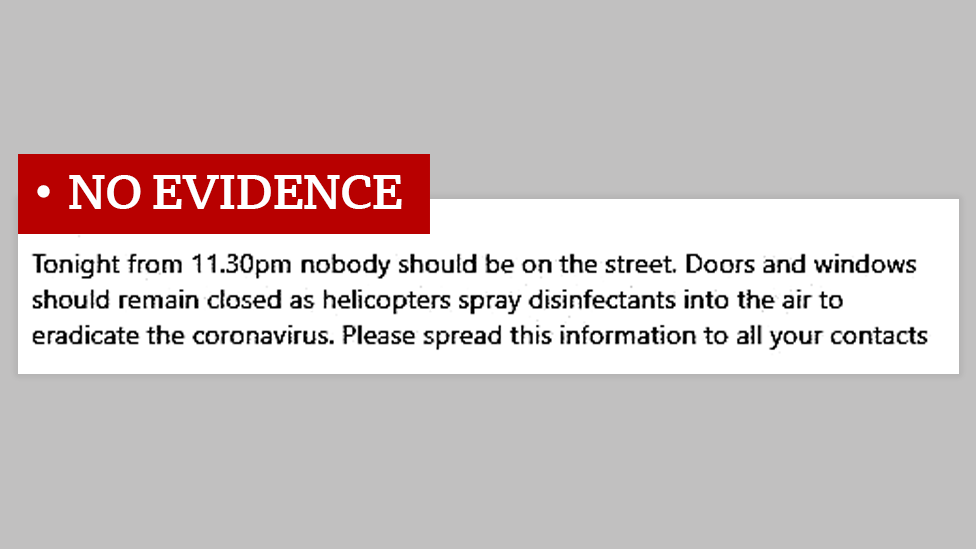 A recent one was forwarded to a group of doctors and nurses on a ward at a London hospital.

Similar versions of the message - helicopters spraying disinfectant - have appeared elsewhere including in Kenya, Italy, Russia and Nepal, according to BBC Monitoring, who have tracked the rumour's spread.

Lots of this is happening on WhatsApp so it's really hard to know who's spreading it.

It may sound unlikely but people are still sharing and believing it. Often because it was forwarded to them by someone they trust such as a friend or colleague.

How you can stop bad information from going viral What misinformation has spread in Africa?

EASY STEPS: How to keep safe A SIMPLE GUIDE: What are the symptoms? CONTAINMENT: What it means to self-isolate HEALTH MYTHS: The fake advice you should ignore MAPS AND CHARTS: Visual guide to the outbreak

This is not Italian police enforcing the nationwide lockdown

A video emerged claiming to show Italian police arresting a man for evading the country's strict lockdown rules, and a version posted on Twitter in India has racked up more than 750,000 views. 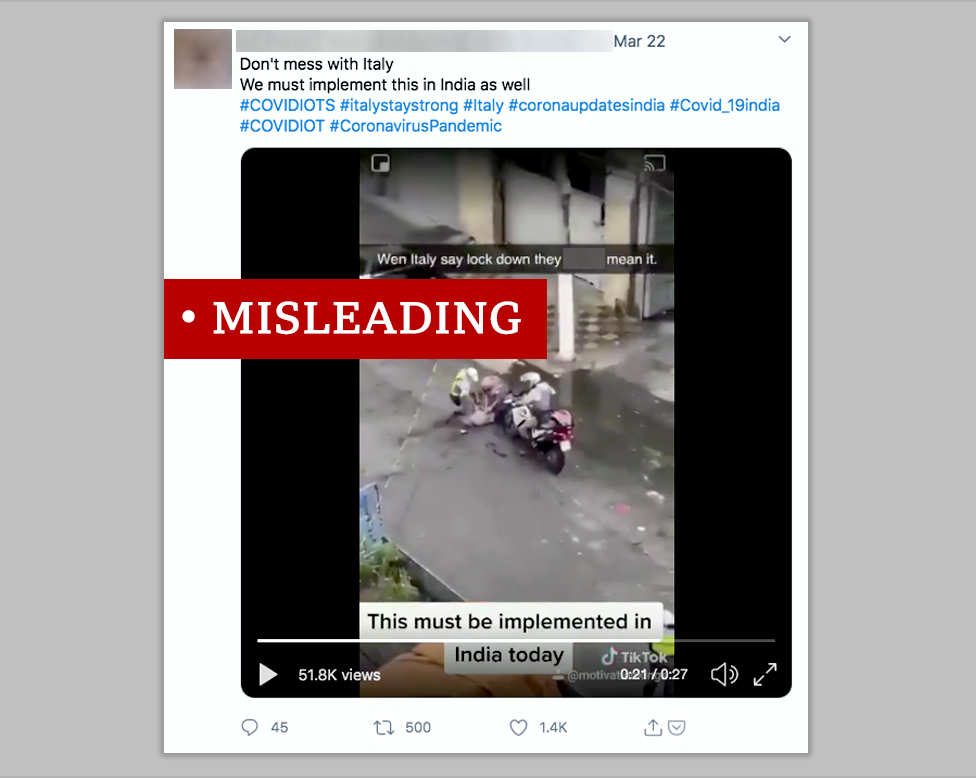 However, it was filmed in Brazil and actually shows the arrest of a man in Sao Paulo for something unrelated to coronavirus. The same footage appears on the website of the newspaper Globo, which reported on the man's arrest.

And the police are wearing T-shirts - you'd think it might be too cold for that in Italy in March.

A voice note in Arabic criticising the state of a famous hospital in Jerusalem has been circulated on WhatsApp, with a photo showing patients lying on the floor. Several Arabic news sites have used the photo in articles about how the Israeli hospital is struggling to cope during the coronavirus outbreak. 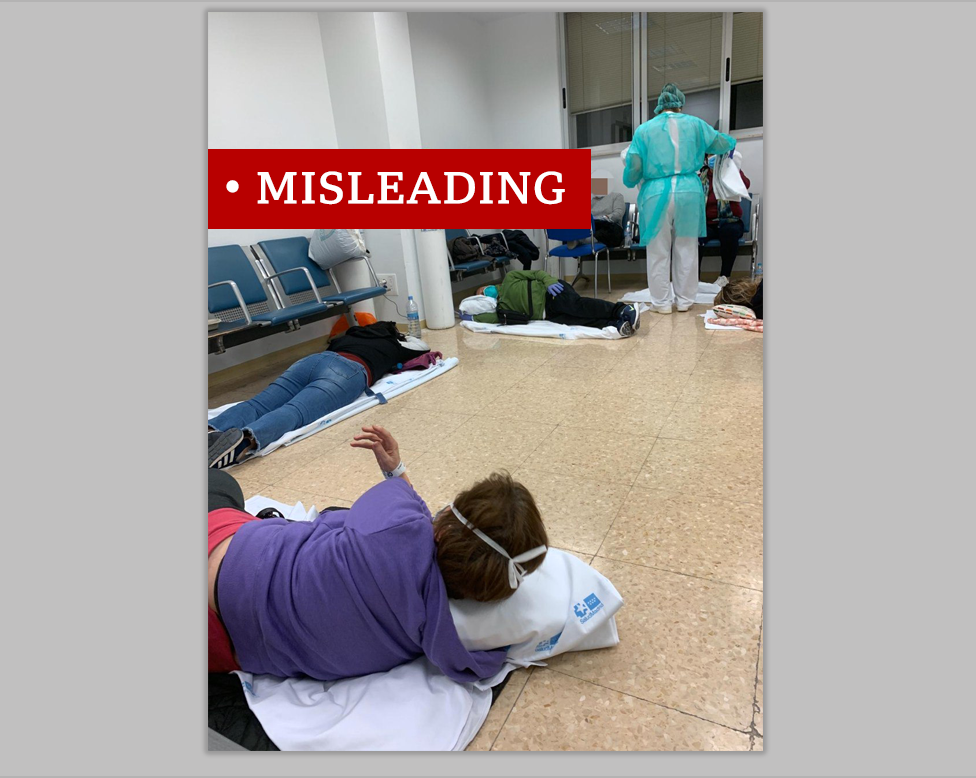 BBC Trending took a closer look and found its real location to be in Madrid. These are patients reportedly suffering from coronavirus. It was first posted by a Spanish Twitter account.

The logos on the hospital pillows and sheets are consistent with bedding from hospitals in Madrid.

Send us your questions